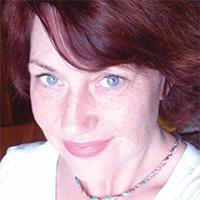 Laura Docter has followed many paths in life, including those of marketing director, factory worker, hausfrau, English Major and NFL cheerleader, not in that order. Coincidently, she has taken notes, which she expands into stories and other bits sometimes worth reading. She is working on her first book, entitled Stories and Other Bits Sometimes Worth Reading. Laura, an often unimaginative, self-effacing sibling of six, originally started writing as a young child so that she could get a word in. Despite having been educated by Catholics grades K-16 (maybe even because of that fact), she is entertained by irreverence and honesty in life, and endeavors to represent those to her reader. It is her hope that, someday, the more classical writing for which she was trained will be published, so that her mother can bear to read her in print. Of course, she'd have to write that first.

Winning Entry: Once Upon a Vagina