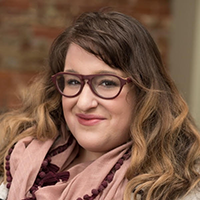 Lauren Singer Ledoux is an assistant judge of the Wergle Flomp Humor Poetry Contest and the Tom Howard/John H. Reid Fiction & Essay Contest, and a past judge of the North Street Book Prize. She is a native New Yorker living in Western Massachusetts. Her poetry has been published in Nerve House, Bareback, Feel the Word, Read This, Kosmosis, One Night Stanzas, and other literary magazines across the country. In 2015 she received her MSW at the University of Chicago, is a graduate of Bard College at Simon's Rock and an attendee of the New York State Summer Writer's Institute. She has self-published three chapbooks, and received an honorable mention in the 2011 Wergle Flomp contest. In addition to her creative interests, Lauren works as a mental health clinician and therapist in Holyoke, MA. Lauren prides herself on her wealth of useless knowledge, namely of nineties R&B lyrics, and she can pretty much quote "The X-Files".