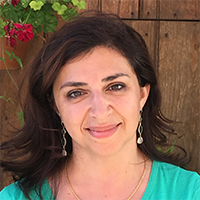 Lena Khalaf Tuffaha is an American writer of Palestinian, Syrian, and Jordanian heritage. She is the author of Water & Salt (Red Hen Press), winner of the 2018 Washington State Book Award, and Arab in Newsland, winner of the 2016 Two Sylvias Chapbook Prize. She holds a BA in Comparative Literature from the University of Washington, and an MFA from the Rainier Writing Workshop. Her poems have been nominated for the Pushcart Prize and Best of the Net, and translated into Arabic, Hebrew, Spanish, and Norwegian, and published in American and international journals. Most recently, her work has appeared in Hayden's Ferry Review, Mizna, New England Review, TriQuarterly, and the American Academy of Poets' Poem-A-Day feature. Her chapbook, Letters from the Interior, is forthcoming from Diode Editions.