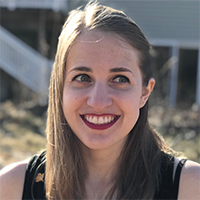 Maria Greer was born in Portland, Oregon, and raised in Missoula, Montana, where she attended K-12 at multiple schools called Hellgate. She earned a BA in History from Stanford University in 2015. While still an undergraduate, she taught a course on fanfiction for the English department, was awarded a Cantor Scholar Fellowship by the art museum, and studied abroad at Oxford University (Magdalen College), where she took the lightest permissible course load and spent most of her time wandering around without a map.

Thanks to a late ADHD diagnosis, she has learned to embrace the title "jack of all trades, master of none". Her professional credits consist of a motley mix of short stories, plays, poetry, reviews, criticism, and academic papers, published or forthcoming in venues including Black Telephone Magazine, Liquid Imagination, Kirkus, and Buzzfeed. She is currently finishing work on her first novel.