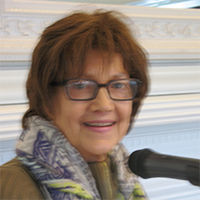 Mary J. Koral (1943-2017) grew up in a small town in northwestern Pennsylvania.  She earned an MA in Creative Writing and Women's Studies at Eastern Michigan University where she subsequently taught Asian American Literature and Creative Writing, among other courses. She published her memoir, The Year The Trees Didn't Die, in October 2015. Mary's short stories were published in The Alaska Quarterly Review, Shenandoah, Cream City Review, Tusculum Review and other journals. Mary resided with her husband Ken in Ann Arbor, Michigan and maintained a blog on her website, "The Year the Trees Didn't Die". She also was a yoga practitioner, and a four-miles-a-day walker. She came to realize that Einstein was right: We can see nothing in life as miraculous or all of life as miraculous. But, as Mary joked, she only achieved the latter state in increments of maybe ten minutes at a time. Mary passed away on October 8, 2021. Her obituary can be found here.