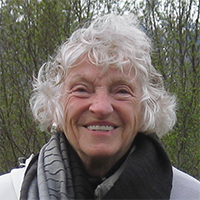 Mary K. O'Melveny lives with her wife, Susan L. Waysdorf, in Washington, DC and Woodstock, New York. She grew up in Seattle, Washington, Washington, DC and Emmitsburg, Maryland and moved to New York City after graduating from college. After retiring from a distinguished career as a labor rights lawyer in New York City and Washington, DC, where she represented workers, labor unions and political prisoners, Mary returned to writing poetry—an interest she had not seriously pursued since graduating from college. Mary's poetry has been published in a variety of print and online journals, including GFT Press, The Write Place at the Write Time, Allegro Poetry Magazine, FLARE: The Flagler Review, West Texas Review, The Offbeat, Slippery Elm Literary Journal, Into the Void, and The Voices Project. Her poems have also appeared on blog sites, including "Writing in a Woman's Voice". Mary is an active member of two Hudson Valley, New York-based writing groups: "Writing Gals" and Wallkill Valley Writers. Her poem "Cease Fire" won the 2017 Raynes Poetry Competition sponsored by Jewish Currents Magazine. Her poetry chapbook, A Woman of a Certain Age, will be published by Finishing Line Press in September, 2018.