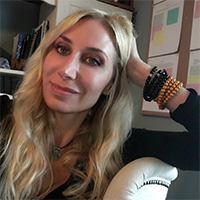 Melissa Studdard was born in Alabama and reared in Cypress, Texas, a suburb of Houston, where she currently lives with her family. She holds degrees from Sarah Lawrence College and the University of Houston and is a professor for the Lone Star College System. She loves to travel, both to share her work and for pleasure, and has recently done residencies at the Hermitage Artist Retreat and The Centrum. As a member of The Grind writing group, she writes a poem a day 8-10 months out of the year and takes the other months off for submissions and revisions.

She is the author of five books, including the poetry collection I Ate the Cosmos for Breakfast and the multimedia poetry chapbook Like a Bird with a Thousand Wings. Her book awards include the Forward National Literature Award, the International Book Award, and more. As well, her books have been listed in Cutthroat: A Journal of the Arts' Best Books of the Year, January Magazine's Best Children's Books of the Year, Bustle's "8 Feminist Poems To Inspire You When The World Is Just Too Much", and Amazon's Most Gifted Books. Her short writings have appeared in a wide variety of periodicals, such as The New York Times, POETRY, Kenyon Review, Psychology Today, The Guardian, New England Review, and Poets & Writers.

As well, her work has been featured in several multimedia projects. A short film of the title poem from I Ate the Cosmos for Breakfast was an official selection for the Trinidad and Tobago Film Festival and the Minneapolis St. Paul International Film Festival, as well as winner of the REEL Poetry Festival Audience Choice Award. Other poems of Studdard's have been used in photography exhibits; performed with orchestra and chamber recitals; and made into car magnets, telepoem booth recordings, and Houston City Banners. Her poems have won or been listed as finalists in many magazine and publication prizes, such as The Penn Review Poetry Prize, the Jeffrey E. Smith Editors' Prize for The Missouri Review, and the Gregory O'Donoghue International Poetry Prize for the Munster Literature Centre.