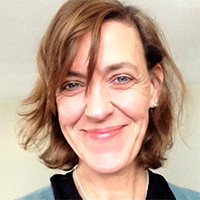 Michelle Tibbetts was raised in Lakewood, Ohio, off the coast of Lake Erie. After attending Kent State University, where she was awarded Wick Poetry Scholarship Awards, she moved to Seattle, Washington where she studied and practiced massage therapy. She returned to Ohio nearly two decades ago to be close to Lake Erie and family and attend law school. She currently is in the process of crafting for herself a meaningful life in which she balances her time between practicing law, working as a substitute teacher with children with special needs, and being a loving mother. She did not discover poetry until she was in her twenties, and believes that poetry has repeatedly saved her life and is how beauty and suffering are recorded and given meaning.

Her poems have appeared in the Seattle bus poetry project and in numerous magazines. In 1996, her book of poetry, In a house full of forks: poems of food and bones, was taught in a creative writing course at Kent State University. She is currently working on several children's books and is also a painter.