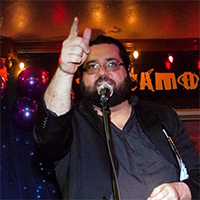 Mike Cecconi has a bachelor's in Writing for TV/Radio/Film from the Newhouse School at Syracuse and still owes them roughly twelve grand. Bouncing between the Adirondacks, LA, and NYC since, he found a less-formal education in poetry & stand-up. He's been published most notably in Utica's Doubly Mad journal and the UK's Critical Quarterly. He's performed at venues such as the Sidewalk Cafe Anti-Folk Festival, the Rochester Fringe Festival and the TEDxUtica conference. He currently lives in upstate New York where he helps run The Utica Poets Society, is active with the Little Falls Public Library Flash Fiction writers' group and emcees multiple open mics. He makes his living as a library aide and waiter, occasionally even getting paid for writing or stand-up. Mike Cecconi has the least-significant legitmate IMDB profile in history, a record the Guinness people have yet to recognize. See his TEDx talk on "Why Comedy Works Better Than Arguing (Sometimes)".