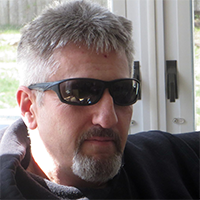 Ralph Gagliardo is the author of the soon to be released memoir Confessions of a Scrap Metal Junkie. It was after a ten year battle with opioid addiction that eventually led him to prison that he says, he discovered "the true power of words." Since his release in 2013, he has returned to college and is scheduled to graduate with an associates degree in the spring of 2017. Working as a tireless advocate for the homeless, addicted, and disenfranchised in Hartford CT, his column "Barb'd Wire" is a regular feature in the street paper "Beat of the Street". After joining the "Faces of Homelessness Speakers Bureau" the song he co-wrote and performed "Walk a Mile" under the moniker RJ Wordsmyth (see YouTube) is used regularly to help educate groups and dispel stereotypes about the homeless community. His more recent accomplishments include starting the blog theloop-hole.com where he shares his wisdom, life experience, and sarcasm, while continuing to learn, to love, and promote understanding and compassion. He is still writing and performing poetry and song lyrics, and soon will be publishing a collection of favorites. He lives in South Windsor, Connecticut.