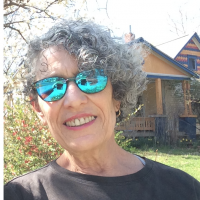 Randi Hacker has been giving children a voice in their future since 1989, when, after quitting her job as Editor of The Electric Company Magazine (published by Children's Television Workshop), she and her former partner, Jackie Kaufman, created, wrote, edited and published Planet Three: The Earth-based Magazine for Kids. P3 was an influential (if short-lived) eco-magazine that empowered children to act on behalf of their home planet. At its peak, it reached 20,000 readers worldwide. P3 received hundreds of letters from children of all ages that spoke of their fears, their worries, and their gratitude that the magazine took them seriously, and gave them an ear and a means of making themselves heard. P3 had a profound lasting influence on at least two of its readers, both now young men in their thirties, who, at different times, contacted Randi to tell her just that. That was wonderful.

Randi is the author of How to Live Green, Cheap and Happy (Stackpole Books), a book for adults, which enjoyed a small cult following; and the young adult novel Life As I Knew It released by Simon & Schuster in 2006 and named one of the Books for the Teen Age by the New York Public Library in 2007.

Not long after the 2016 US presidential election, Randi founded Kids of the United States (KOTUS), a postcard-writing initiative to empower kids to write and send postcards to people in power. During its existence, KOTUS sent more than 400 postcards to various corporate heads and politicians.

Randi is also the creator and co-writer (with Jay Craven) of Windy Acres, a mini-series produced by Kingdom County Productions and broadcast on Vermont Public Television in 2004. It was nominated for a New England Emmy for Writing.

Randi has not yet saved the world, and that is a real thorn in her side. Home Planet Books is her most recent initiative aimed at rectifying this distressing situation.

Winning Entry: M Is for Masks