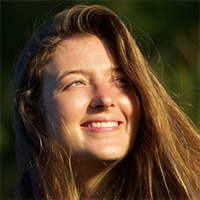 Sadie Rittman was born in New York, grew up in Singapore, and most recently lived in a treehouse in Hawaii. Sadie graduated with high honors from Swarthmore College in 2016, where she studied religion and anthropology and wrote her thesis on elves in Iceland. She was awarded the Jesse H. Holmes prize for an essay on love. After graduating, Sadie worked for the Chautauqua Literary and Scientific Circle, the renowned "oldest continuous book club" in the United States. Now Sadie is traveling the world long-term, exploring perspectives in more than 40 countries so far, while working as a manuscript editor and writing across genres. She is working on her first novel.

Deadline Jul 15: The Rattle Poetry Prize offers $15,000 for a single poem to be published in the winter issue. Ten finalists will also receive $500 each and publication, and be eligible for the $5,000 Readers’ Choice Award | rattle.com/prize/about/ @RattleMag with @submittable pic.twitter.com/ubAfhvPWdt