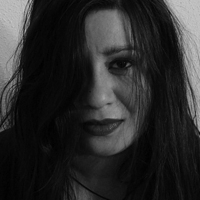 Sandra Kasturi is a poet, writer and editor, as well as co-creator of a kids' animated TV series. In 2005 she won ARC magazine's annual Poem of the Year award. She is the poetry editor of ChiZine and the Senior Editor of ChiZine Publications. Sandra has written three poetry chapbooks and has edited the poetry anthology, The Stars As Seen from this Particular Angle of Night. Her work has appeared in various magazines and anthologies, including Prairie Fire, Contemporary Verse 2, TransVersions, On Spec, several of the Tesseracts series, 2001: A Science Fiction Poetry Anthology, and Northern Frights 4. Her cultural essay, "Divine Secrets of the Yaga Sisterhood" appeared in the anthology Girls Who Bite Back: Witches, Slayers, Mutants and Freaks. Sandra is a founding member of the Algonquin Square Table poetry workshop and runs her own imprint, Kelp Queen Press. She managed to snag an introduction from Neil Gaiman for her first full-length poetry collection, The Animal Bridegroom (Tightrope Books).