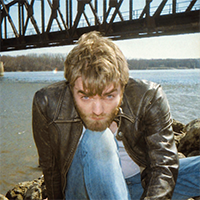 Sean Patrick Mulroy is an internationally recognized writer, musician, and performer. Born and raised in small-town southern Virginia, he has presented his poetry and music in art galleries, at literary festivals, in concert venues and universities in 10 countries and on 3 continents and his recorded poetry performances have garnered nearly half-a-million views. He has written and recorded 4 albums of original music, and starred in the award-winning webseries, "Wrecked".

A 2013 Lambda Literary Fellow, he earned his MFA in Creative Writing from the University of Wisconsin-Madison in 2017, is a 2017 Kurt Brown Prize winner, and a 2017-2018 Writer-In-Residence at The Kerouac Project. This year he will be a resident at Villa Sarkia in Sysmä, Finland, and The Wallace Stegner House in Saskatchewan, Canada. His work has been published in The Journal, The Gay and Lesbian Review, Muzzle, and Assaracus, among many others. Sean is currently spending time back in his home turf of rural Virginia while organizing his second European tour.

Winning Entry: Villanelle for the Wound