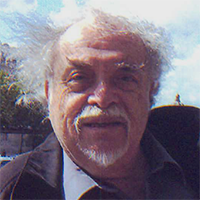 Some 500 poems of his appear in 100+ journals and anthologies here and abroad. Hawk Publishing Group published his The Complete Lost Poems: A Selection. Recently, he was awarded the Der Hovanessian Prize for Translation. He feels that Parnassus has room for both free verse and formal, both of which he writes. His intent is to create a world, real or imagined, which the reader can experience. The poem, he feels, is a subsistent reality which, at its best, will enlarge and enrich the reader's world.

Winning Entry: Letter to Her Father