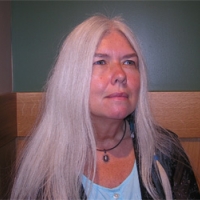 Susan Deer Cloud is a writer of Blackfoot, Mohawk, Seneca heritage (Métis) who grew up in the Catskill Mountains but for many years has sojourned in many places. She is an alumna of Binghamton University where she has occasionally taught Creative Writing.

Deer Cloud's books of poetry are The Broken Hoop, In the Moon When the Deer Lose Their Horns and The Last Ceremony. She is the editor of the multicultural anthology Confluence. She has edited a Native anthology, I Was Indian, and is current guest editor of Native Journal, Yellow Medicine Review. She has also published poems, stories, and essays in numerous literary journals and anthologies: Rosebud, Pembroke Magazine, To Topos, Ms., Many Mountains Moving, Sojourner, North Dakota Quarterly, Quarterly West, Arizona Quarterly, Mid-American Review, Paterson Literary Review, Negative Capability, Shenandoah, Prairie Schooner, Ladyfest*East Anthology, Sister Nations: Native American Women Writers on Community, A Nation Within: an Anthology of Native American Poetry, Listening to Water: the Susquehanna Watershed Anthology, WPFW 89.3 FM Poetry Anthology (from Public Radio's "The Poet and the Poem"), American Mixed Race: The Culture of Microdiversity, Out of the Catskills and Beyond: Literary and Visual Works by Catskill Writers and Artists, and Penguin's Unsettling America: an Anthology of Contemporary Multi-Cultural Poetry and Identity Lessons: Contemporary Writing About Learning to Be American, among others.

Deer Cloud has received awards and special recognition in literary competitions for both her poems and stories (for instance, her poem "Tree" received first prize in the Allen Ginsberg Poetry Competition; her poem "Vincent Van Gogh Writes To Madame Calment From The Stars" was awarded second prize in Negative Capability's Eve of St. Agnes Poetry Competition; and two of her poems received Readers' Choice Awards from Prairie Schooner). She is a recipient of a New York State Foundation for the Arts Poetry Fellowship, a Chenango County Council for the Arts Individual Artist's Grant, and is the founder of Binghamton Underground Poets, Wild Indians & Exuberant Others, Unc. (Unincorporated). Most recently she was awarded the National Endowment for the Arts Literature Fellowship in Poetry (2007).

She has a cat, Wu Wei ("Doing Nothing"), who likes to hear poetry read out loud.

Our freelancer and contest judge Annie Mydla is building an awesome @instagram feed for us at instagram.com/winningwriters/ - it features winning entries from our contest archives. Go look! pic.twitter.com/L76JDoxn1T

After years of complaints from users, Goodreads’ reign over the world of book talk might be coming to an end. newstatesman.com/science-tech/s… @goodreads @thestorygraph via @NewStatesman HT @digg pic.twitter.com/HlDbIazztb