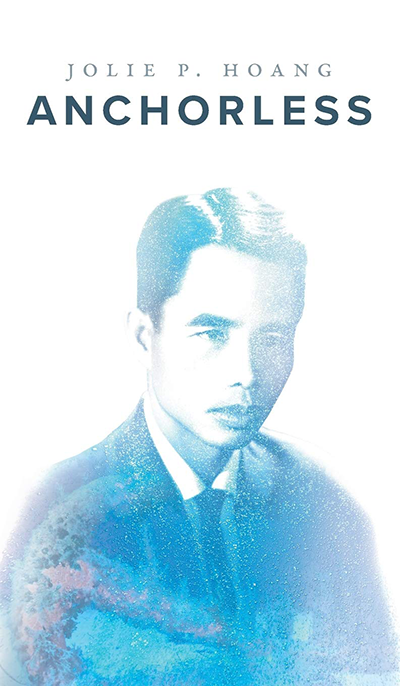 The opening paragraphs of Jolie Hoang's compelling novel Anchorless (based on true events) not only showcase her beautifully rendered lyric prose, but pull the reader into her family's story of escape from the war in Vietnam, retold in vivid detail through the words of her father's ghost:

I died when I was sixty years old. I was a husband, and a father of ten living children. My death was not natural. I died with my youngest daughter who was nine years old at the time...I died while escaping Vietnam on a small boat, with my wife and my three younger children...I died in the Pacific Ocean in Vietnam, while trying to shorten the distance between us all...

I begged God to please allow me to not yet enter Heaven. "Let me live as a ghost..."

"Why would you want more suffering?" God asked me firmly. "While in death you are free of the living. In Heaven you are at eternal peace. Give me a good reason to let you live as a ghost."

After a stern lecture to the drowned man, God listens, understands that the man is suffering terribly in death, and realizes that his tormented soul needs time to learn the meaning of death.

The ghost of Hoang Trong Phu serves as a brilliant literary device. The book successfully straddles fiction and memoir; there is a haunting magical realism to the writing that creates a dual sense of reality/unreality. This heightens the tension and evokes strong emotions in the reader. Not only did I believe in the ghost, but I cared about him as he quietly did the work of self-healing, contemplating and processing the traumas he endured during the war, and following the events of his children as they went about the business of living without a father.

After Hoang Trong Phu drowned in 1985, his body was recovered from the sea and buried. It was reburied years later at a temple site, and disinterred a final time in 2015. Even though he is invisible to his children in the book, they help to calm his ghostly restlessness some 29 years after his first burial by arranging a grand funeral in America.

My bones had stayed healthy and completely preserved, despite being underground for 29 years. The red cloth, which was used to wrap my bones, retained its color and shape. My sons wanted to see me for the last time...Their trembling hands reached into my opened coffin, and they wept.

Full disclosure: I wept, too.

It was a great honor to get to know this ghost. I appreciate the brevity of the book at just over 100 pages. A good number of entries this year were over 400 pages, and many of these very large books needed serious editing and compression. I am awed at how much horror, beauty, and joy Jolie Hoang packed into those pages.

I also appreciate how much I learned about Vietnamese customs and history from this book. I knew in a general sense that Vietnamese refugees often escaped on rafts or boats, but never realized how complicated it could be to acquire and navigate a seaworthy vessel. There were escape routes to plan, materials to be acquired, bribes to be paid, engines to be built, secrecy to be maintained, and so on.

There were few errors. Some of the chapter transitions were non-chronological, which my co-judge Jendi Reiter felt was sometimes confusing. I agree about the abruptness, but perhaps this was a way to emphasize the confusion of war and its dislocations.

The book has a strong binding with readable print and good spacing. An aesthetically pleasing monochromatic cover depicts photos of a man I assume to be the author's father. I congratulate Jolie Hoang on this creative achievement.

Read an excerpt from Anchorless (PDF)

Buy this book from Amazon