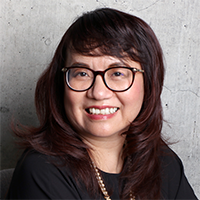 I was born in war-torn Vietnam, in the small town of Quang Duc, where my father owned and operated a construction business. He got the Americans' contract to expand the village by constructing more roads, building hospitals, schools, and military barracks. My first memory of the grueling war was running through a dark tunnel, hearing loud gunfights, and hiding in an underground cave in the middle of the night. My father courageously guarded the door while my mother quietly sang a song to soothe their children's fears. When I reached school age, my parents moved the family to settle in Dalat city, where the civilians experienced the least impact of the war. I grew up with ten siblings, sheltered by my parents while the Vietnam War news made headlines around the world.

The years 1979 to 1989 were a decade defined by images of Vietnamese Boat People. The news about their horrendous escapes, astounding rescues at sea, and the rapid establishment of refugee camps dominated the broadcasting channels. Five of my siblings and I fled Vietnam in May of 1983. After surviving nine days at sea, we arrived in Indonesia and lived in the Galang Refugee Camp until we resettled in Canada in July of 1984. I obtained my priceless freedom, but its consequence was years of living in agony. My father and my youngest sister perished at sea in their attempt to escape Vietnam in 1985.

Fate can be brutal. Grief has made time become a toxin of pain. Yet, I was deeply rooted in the teaching of the discipline and the resilience accentuated by tradition. Responsibility is the priority when life poses a challenge and gives no transparent solution to a grief-stricken individual's mentality. Almost every year, during June, I held a memorial for my father and youngest sister. My daughters asked me about the circumstances behind their deaths. The answer is not simple, to be worded in a few effortless sentences.

I was trained to teach mathematics. For more than twenty-five years, my career has been based on lectures about formulas, mathematical theorems, and how numbers shaped our lives. Mathematics kept me focused whenever my mind was in chaos from tangling thoughts mixed with endless unanswered questions. However, while putting my thoughts on paper, I had to dig deep into my heart, search for the solution in the depth of my soul. In the process, thoughts were disentangled, and questions were answered. Grief and sorrow were a pair but slowly separated, then departed with the increasing numbers of words that resulted in the completion of Anchorless.