In the town of Reims, the office of the bourgeois optician
kept rubble behind its facade,
and Will saw the shutters on the second floor, fallen together

like an ineffective fan above the balustrade. Near the cathedral,
he passed the cemetery,
arbitrary joke, bombed, enormous marble stones ripped

from their tombs, open like small boxes on the tympanum
to the north, but here were no souls
climbing from graves. Le Beau Dieu, beautiful God startled him,

the trumeau before the last judgment, before a wall pock-marked
by automatic fire, Christ with his head
blown off, his hand, raised in blessing, cauterized to a flinty stump.

In the archivolts above, twenty four elders kept playing celestial
music, except the ones whose violins
had been charmed to smoke by stray bullets, and the dead continued

to clamber toward the other Christ enthroned, tucked safely
into the pinnacle of an arch.
Will entered the church past the jambs of the annunciation,

the young virgin responding to the news with empty sleeves
as the one-armed Gabriel
smiled without end at its delivery. He entered massive portals

into the scaffolding of cathedral, windows of armature, wire fences,
stone rosettes above arranging only
wind, the glass all shot out. Through the dust of the nave, debris

tumbled into the aisle, fragments of tracery, broken chairs,
half-burned hymnals, he walked
toward the choir, guided by shade and patches of natural light

shaped like lancets and shell holes. In the north wing of the transept
hung a marble Christ
crucified, his hands and arms missing, fastened only at the feet

and Golgotha, the place of skulls, torn from beneath him.
Another Mary grieved
to his right, leaned against a column bundle, still looking to him,

her base broken and tipped. He thought he should pray,
wished he'd studied more
to know a prayer for destruction but could only recall

a line from a prayer for the dead. "O Lord," he said aloud, "let
perpetual light shine
upon them." And the window behind the crucifix let in light

too plain for the room, too gray, and joined the choir with the streets,
with the houses and cafes of Reims
in secular ruin outside. The church should resist, he thought, should

rise up against shells. It should be sheltered, but the virgin against
the pier seemed helpless,
wobbly, ready to crash to the ground at his boots, and the same for Christ

with no arms, worse than nails, worse than sacrifice, no power
to redeem, but promise
of annihilation of even sacred things, and he felt at once akin

to the stones, picked one up from the rubble, ran his thumb
across the texture of the break,
brought it to his mouth, and sang low so only stone could hear.


A photograph of the cathedral: 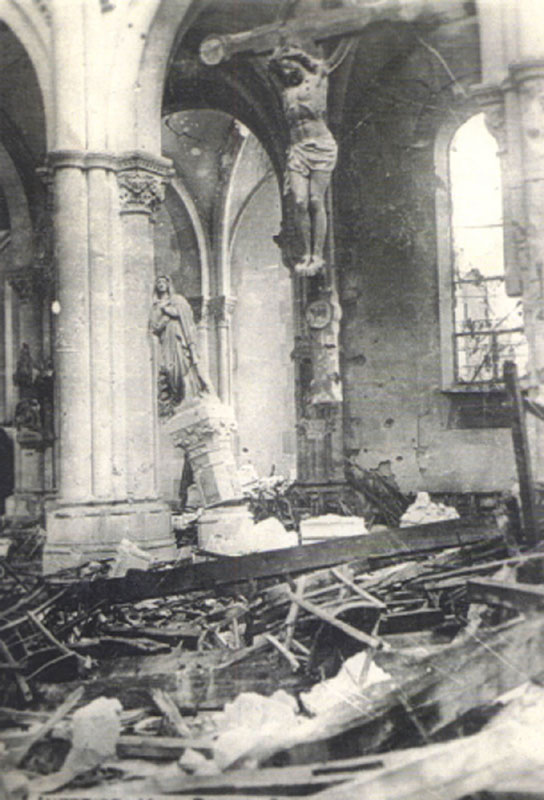 Our May newsletter features the sixth installment of "The Love Song of J. Alfred Prufrock" by T.S. Eliot, illustrated by Julian Peters | createsend.com/t/d-BFCF4917BB… @jpeterscomics pic.twitter.com/SYfqBIXdFC

Deadline May 31: Flying South Prizes in Fiction, Nonfiction, and Poetry; submit unpublished work to win up to $1,000 and publication; fee: $25 ($15 for members of Winston-Salem Writers) | wswriters.org/flying-south @wswriters with @submittable HT @newpages pic.twitter.com/DhfbAFuyCI

Deadline Jun 5: The winner of the Lorca Latinx Poetry Prize for an emerging Latinx poet will receive Spanish translation and bilingual publication of their unpublished English-language ms and $500 from Letras Latinas; no fee | ecotheo.org/about-the-lorc… @ecotheo HT @hopeclark pic.twitter.com/Auz7EAWqws