Home  >  Past Winning Entries  >  From the Banks of Brook Avenue

From the Banks of Brook Avenue 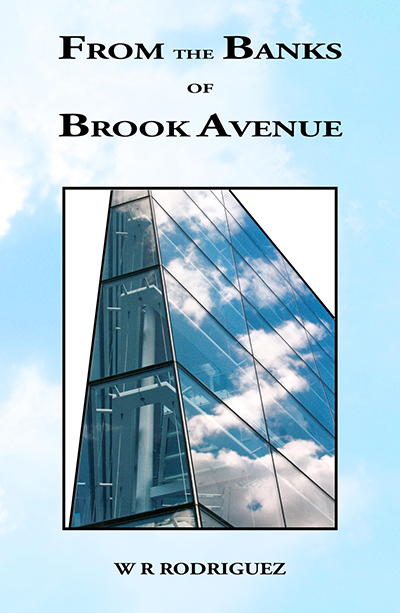 W.R. Rodriguez's poetry collection From the Banks of Brook Avenue immersed me in the New York City I remember from my 1970s Lower East Side childhood—the many fertile layers of industrial and immigrant history buried under the grit and hustle of new enterprises. Here, a working-class neighborhood wages successful guerrilla warfare against the city's installation of parking meters. Here, a lethal giant could sit next to you on the subway, or an elderly saint serve cheeseburgers to your teenage crew at the diner. Cars crash into statues, and the slow-moving monsignor outside the cathedral is in danger of becoming roadkill from an indifferent bus. The ghost trains of the defunct Third Avenue El rumble through a century of American dreams of liberty and labor exploitation.

My co-judge Ellen is a die-hard Red Sox fan, a/k/a Yankees enemy. So she's really saying something when she calls Rodriguez's baseball poem "yankee fan" a modern classic. Full of streetwise humor and insider nostalgia, the sports poems in this book capture the innocent energy of an urban boyhood, where bonding with pals over games was sweet relief from the racism and bullying in his Bronx public school.

Some of the strongest poems take landmarks in the five boroughs as the focal point for a close-up on the city's political and economic past: Randall's Island, Astoria Park, the Triborough Bridge. When Rodriguez looks at these places, he also sees what used to be there: the fallen soldiers named on a memorial, the railroads and sawmills of the Northeast's vanished industrial heyday, the shuttered asylum where forgotten people were sent to die. And he dreams of a future city where rivers will be clean, workers will find rest, and the beauty of the lights will continue lifting our souls out of the muck.

All the poems are written in an of-the-moment voice with no capital letters or punctuation. While this plain-spoken style fits with the "people's poetry" motif, it is a risky choice to present 80 pages in what amounts to a visual monotone. The prose-poems formatted as unbroken page-long text blocks were particularly challenging to read. The wall of text can be numbing and intimidating without typographic variety for the eye. Capitalization and punctuation function as the equivalent of rests in music, a pause that offsets and enhances the "notes" (words). If the author's style eschews these, he needs to think more about other visual elements, such as margin indents and stanza breaks, that could replace them.

The physical book was sturdily bound and the thick linen paper had a pleasant feel. The cover, with a light blue cloudy sky and an inset photo of a glass-and-steel modern building, had harmonious proportions. However, it did not really convey the New York that Rodriguez excels at showing us—the earthy foundations beneath the glitz. This book would be great to share with urban and minority students who crave poetry that reflects their real lives with honesty and respect.

Read selected poems:
From the Banks of Brook Avenue