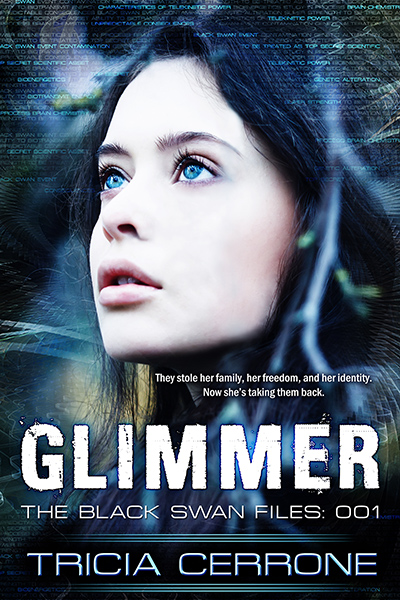 Tricia Cerrone's sci-fi thriller Glimmer takes place inside Camp Holliwell, a secret military research facility where genetically enhanced teenager Jocelyn Albrecht must fight brainwashing and imprisonment by government scientists who want to use her as a weapon.

Glimmer's depiction of mind control and captivity was believable and gripping. My heart raced each time Jocelyn fell back into her tormentors' hands. I appreciate that the villains' tactics did not include sexual assault, an exercise in authorial restraint that broadens the book's appeal to women and young adults. Another plus was the racially diverse cast, including a couple of girls with serious skills in the STEM fields. The female camaraderie and resourceful teamwork provided good role models in an often male-dominated genre.

Some aspects of the plot were implausible or hard to follow. Too many characters were introduced in the beginning, in different locations, and their connections were not revealed soon enough. It also seemed unlikely, even by the standards of the genre, that so many teenagers in the same community would have genius-level skills in different areas. I didn't understand how Richie could afford the technology he used to trick out Graeme's car.

My fellow judge Ellen LaFleche and I debated how to classify Glimmer in terms of genre. I assumed Young Adult initially because the protagonist and most of the major characters (except for the villains) are teenagers. However, Ellen doubted whether this audience could keep up with the complexity and length of the story. Certainly there are eminent novels about children and youth that are pitched at adult readers—everything from David Copperfield to Tom Wolfe's I Am Charlotte Simmons—but commercial fiction publishers tend to slice the demographics more finely. On the other hand, one advantage of self-publishing is the freedom to work outside the narrow parameters of the industry.

The book design from The Killion Group was attractive except for the back cover, which had too much text in small type and a less-stylish font than the front and spine. The title confused me as to what the book was about. "Glimmer" was not related to anything in the plot as far as I could see. Coupled with the electric glowing portrait of the young woman on the cover, it led me to expect a paranormal fantasy. The subtitle "The Black Swan Files: 001" was only a partial step in the right direction. "Files" immediately conjures up military secrets and futuristic discoveries (like "The X-Files" TV series), which is exactly what the book delivers. The notation "001" confirms that impression and also tells us that this is the first book in a series. However, "Black Swan" suggests fairy tales and ballet. It's a metaphor for a biological rarity, which our protagonist is, but it's not a code word that's regularly used by the characters. Something like "The H+ Files" or "The Sunday Project" would have more relevance to the story and the genre.

I would suggest not giving away so much of the plot in the jacket copy. Cut the first three paragraphs and focus on the one-sentence premise: A genetically enhanced young woman must break out of a secret government facility before the next experiment kills her. To situate the book more clearly in the sci-fi/thriller market instead of YA, don't waste jacket copy space on the supporting teen characters. Draw in adult readers by mentioning adult characters: unscrupulous military scientist Laurence Cashus and his antagonist, captive Russian scientist Sergei Baratashvili.

The cast list in the beginning was a nice touch that could have been made even more useful by including the characters' last names and a more concrete description. Here is the place to use the squibs about Seth, Georgie, and Graeme from the back cover, and write similar taglines for the others. Rearrange them to put the minor characters (Brittany, Lena, Alistair, Richie, Medina) at the end.

The ending of Glimmer struck the perfect balance between closing the immediate story arc and leaving enough cliffhangers for the sequel. Our heroine is safe for now, but she has to find her family before time runs out, because her enhanced genetic condition shortens her life. The government hasn't given up on their sinister program. To top it off, there's a love triangle. I certainly want to find out what happens next!

"The notion of making money by popular work, and then retiring to do good work, is the most familiar of all the devil's traps for artists." -Logan Pearsall Smith, essayist (1865-1946) via @awad wordsmith.org/words/brewster…