Home  >  Past Winning Entries  >  She's Such a Bright Girl

She’s Such a Bright Girl 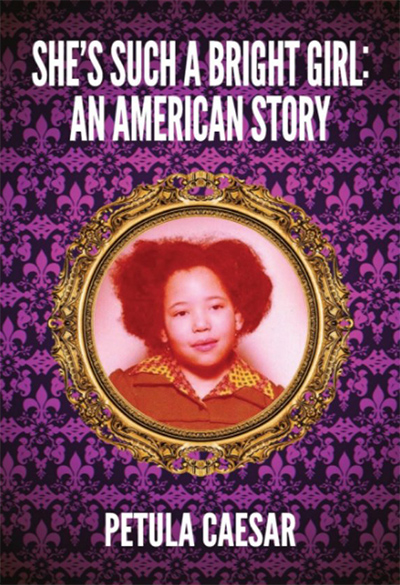 Petula Caesar's memoir She's Such a Bright Girl: An American Story, an exploration of the intersections of racism, classism, and sexism with a focus on colorism within the author's nuclear family, urgently needs a wider audience. As one of our screeners noted: "This book is a major gesture of solidarity with anyone who must endure colorism and its effects, and a graciously and generously-provided tool for would-be allies who seek to eliminate, in themselves and their communities, the personal and institutional racism that causes and perpetuates colorism." (For those unfamiliar with the term, colorism is internalized prejudice against darker-skinned people within the Black community.)

During the judging process, I especially appreciate entries that teach me something—not necessarily new facts but new ways of seeing the world, new ways of thinking, and new ways of challenging my own embedded ways of thinking. This book did just that. It stayed in my thoughts as I considered not only new information about the history of colorism, but my own complex reactions to historical racism.

A powerful theme in the memoir is the writer's complicated relationship with her beloved father, who wants his child to be as "white" as possible. Conflict with her father erupts in the opening pages, a few years after Petula, a light-skinned Black woman, has given birth to her light-skinned daughter, Jasmine. Her father is admiring his granddaughter when he says, "Petula, you have a beautiful little girl here. You should be proud of her. But it is a shame about her hair." In other words, he is disappointed that her hair isn't straight like a white girl's. Caesar must put aside her hurt and anger long enough to comfort her daughter:

"(I) bounced Jasmine on my hip, smile sweetly, and say, 'No baby, your hair is beautiful.' I touched her hair with as much tenderness as I could muster, winding my fingers gently through her kinks, trying to will the reassurances into her four-year-old body."

This powerful opening propels the reader into Caesar's story, which reveals her father's own struggles with race, age, and class divisions. Caesar's relationship with her parents is complex, troubled, and most of all, deeply loving. As the memoir unfolds, Caesar moves through adulthood. Her struggles and triumphs are documented in stylized, accessible prose. A major theme is her love of books, a joy she shares with her father.

The strength of her writing is how Caesar addresses social issues without relying on dense academic language. Her prose is compelling but welcoming to a variety of readers. There were some minor errors throughout, which could have been easily taken care of by a copy editor. Visually, the book was sometimes uncomfortable, mostly because of extremely long paragraphs and the need for spacing between sections. These are small complaints in an otherwise outstanding memoir. I believe this book should be included in high school and undergraduate classes on racism and sexism. It's that good. It's that important.

It was an honor to judge this memoir, and I extend congratulations to Petula Caesar and thank her for sharing her story.

Read an excerpt from She's Such a Bright Girl.