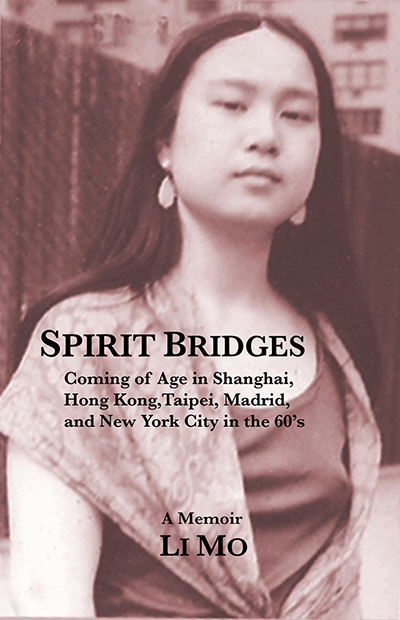 Li Mo's imagistic, introspective memoir Spirit Bridges depicts a childhood indelibly marked by political trauma, a lost young woman's coming of age in the American counterculture of the 1960s-70s, and a midlife re-integration of herself through the visual and performing arts.

Born in Shanghai in 1947, Mo was only two years old when the city fell to the Communists, wiping out the city's cosmopolitan communities with the exile or execution of anyone deemed "bourgeois". Her father was executed as a political prisoner, leaving her mother, an international journalist, to raise seven children in poverty. Heroically resourceful, but with a hardened temperament that often wounded the author, her mother managed to smuggle her and her two younger siblings out of the country, first to Taipei, then Europe, and finally to New York City in 1960.

In contrast to her mother, whom she describes as a "warrior" with language, Mo was isolated by her inability to learn the many languages of the countries they passed through, as well as undiagnosed dyslexia. Instead she thought in pictures, a synesthesia that lends her storytelling a rich sensory quality and a dreamlike stream-of-consciousness flow. The rituals, landscape, food, and smells of the land she left behind are so real to her still, the chapters on her American adulthood feel almost dissociated by comparison.

The last third of the book is slightly more disjointed, though probably an accurate reflection of her traumatized state of mind. These chapters were not as tightly woven into the first two-thirds of the narrative and created some temporal confusion for the judges. At any rate, her writing style is so poetic and original that if she hadn't confessed her past difficulties, I would not have guessed that she ever struggled with words.

On a personal note, I grew up on New York's Lower East Side, not far from the Henry Street Settlement House where the author took ceramics classes as a teenager. One of my mothers attended Seward Park High School and fondly remembers the choir director who had such an impact on the author's life. My Brooklyn high school was even graced by occasional visits from the anti-war Bread and Puppet Theater troupe, with whom Mo had marched against the Vietnam War. Her reminiscences capture the grass-roots idealism of the city of my childhood, as well as its overwhelming sensory input and ethical contradictions—as when she describes the indifference of her leftist male partners regarding her emotional needs and parenting duties.

Mo writes eloquently of the healing and community-building power of these populist art spaces: "More than making things or learning a new skill, the Settlement House demonstrated how making art together affirms something about being human—our desire to put our dreams and aspirations into a concrete form...The art center was like a farm; instead of producing food and working the earth, the place showed us we didn't live on bread alone; our souls needed nurturing and care."

The life-spanning narrative that began with her father's untimely death concludes at her mother's funeral, an elegant structural choice that gives Mo the opportunity to make peace with her mother's complex legacy. She was a woman who overcame unthinkable obstacles to protect her children, yet judged her daughter harshly for having different skills and weaknesses than her own. I did feel that the book's final paragraph ended abruptly, seemingly in the middle of a scene; another sentence or two would have given it better closure.

The book design was clean and easy to read, with few errors. The sepia-toned cover photo of the author as a young woman coded the book correctly as a serious literary and historical work. The subtitle "Coming of Age in Shanghai, Hong Kong, Taipei, Madrid, and New York City in the 60s" is accurate and intriguing but a bit too long. Wordy and overly descriptive subtitles are out of step with current publishing trends and therefore can make your book seem amateurish. Perhaps leaving out some of the intermediate cities would work.

The judges learned a lot from reading Spirit Bridges. It was a pleasure to savor Mo's imagery and to see familiar locations through a new lens.

.@griffinpoetry will award CDN$65,000 for the best collections of poetry in English published during the preceding year. Two categories: International and Canadian. The Dec 31 deadline is for books published between Jul 1-Dec 31. No fee. Publisher submits. griffinpoetryprize.com/the-prize/ pic.twitter.com/XJuuMGkmiE