Home  >  Past Winning Entries  >  The Man Who Beat Death Valley

The Man Who Beat Death Valley 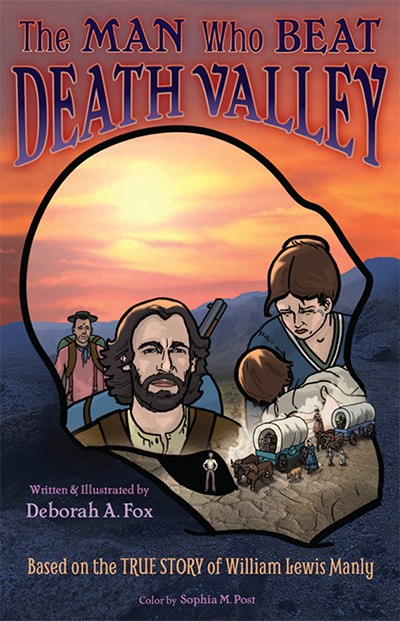 Deborah A. Fox's thoroughly researched graphic narrative The Man Who Beat Death Valley reconstructs an adventurous episode in the life of William Lewis Manly, a 19th-century pioneer. Lured West by the Gold Rush and the promise of cheap land in the Oregon Territory, his party of impoverished homesteaders became lost in the Great Basin Desert in the winter of 1849-50. Manly and his friend John Rogers trekked 500 miles to reach aid in Los Angeles and bring it back to their starving companions. Fans of Jack London's tales of wilderness survival will find this a gripping read.

Graphic novels can be a medium well-suited to condensing and animating historical events for readers who find traditional biographies too dry. To succeed in this format, the creator must be selective about what incidents to include (even more than in a regular prose book). The story arc should be strong and uncluttered by too many side plots. Panel composition should be varied and dynamic. The creator should take advantage of the unique features of visual narrative so that it's clear why this story had to be presented in this medium.

Manly's saga has some key elements that make it a good fit for graphic presentation. There are awe-inspiring natural vistas, survival challenges, and a chaste unrequited love story between Manly and Sarah Bennett, the wife of a fellow pioneer. Fox dramatizes them well with action panels of perilous river rapids, hunting for game, steep mountain paths, and the emaciated and disease-twisted bodies of people and animals stranded in harsh terrain. These explosive moments are interspersed with welcome pauses when the pioneers find temporary refuge, with tender close-ups on the interactions with kind strangers.

Indigenous activists and allies are urging us to rethink the word "pioneer," as it could falsely imply that white colonizers were the first to discover or inhabit America. Nowadays, a responsible retelling of frontier history has to present other difficult truths alongside the resilience and courage of the settler families.

The judges appreciated Fox's noble and respectful portrayal of the diverse inhabitants of the West. Manly's party is saved more than once by aid from Native Americans and the hospitality of Spanish people at a California mission. His companions include a Black man fleeing slavery in Kentucky. The Man Who Beat Death Valley proves that a book can feel true to the time period without replicating the outdated slurs that those characters would have used.

We were not as excited about the artwork style and color palette. Browns, flesh tones, and olive greens predominated. While some drabness is appropriate in a story about physical privation in a desert, the Western landscape also boasts strikingly colored vistas that could have been featured for contrast. As it was, even the scenes of fertile green land were too muted. The three-dimensionality and high resolution of the photographic backgrounds didn't mesh perfectly, in my opinion, with the two-dimensional painterly style of the characters in the foreground.

The speech bubbles were easy to read, in a large and legible font, with no notable errors. Excerpts from Manly's journals were printed in a script font on parchment-colored caption boxes. The contrast was sufficient, but small handwriting-style fonts are hard on the eyes after a while. If you choose a font for artistic reasons rather than legibility above all, consider using shorter text passages so that the print can be larger.

True-life stories pose the challenge that they don't always have closure. Here, the 1849 storyline was bookended by an 1861 episode where Manly and fellow traveler Charles Alvord are once again stranded in Death Valley and waiting for Bennett to return before their supplies run out. However, the book ends with Manly and Alvord simply heading back to their settlement, never finding out what happened to Bennett. We questioned the necessity of this framing story since its resolution was anticlimactic.

With thorough endnotes and references for further reading, The Man Who Beat Death Valley is an engaging and informative tale for both adults and teens. It would be a good entry point for middle school and high school students to develop an interest in frontier history.

Read an excerpt from The Man Who Beat Death Valley (PDF, 17MB, please be patient for loading)