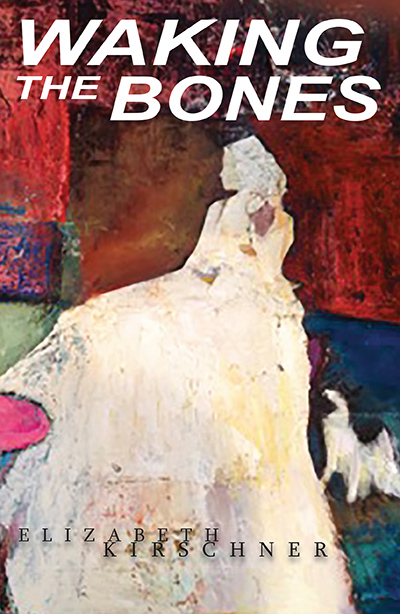 Waking the Bones by Elizabeth Kirschner was by far my favorite book of all the entries. A poet by trade, Kirschner has created a book so lyrical, so gorgeously styled, so filled with metaphor and meaning, so filled with magic and painful reality, that it transcends the genre of memoir.

The book begins with the simple question: Where do you live?

The author's answer to this basic question propels the reader into Kirschner's magically realistic emotional and psychological world:

I live in a house on the water called Sea Cabin. I live in in a house that my carpenter and I rebuilt. We rebuilt my house with silly putty and countless nails, with prana and plumb lines, with fairy dust, plaster and luxurious paints made from watered silks, whose colors range from desert sage to cornflower yellow, from buckwheat gold to tangerine, ember red to a hallucinatory aquamarine.

Kirschner's house is a metaphorical shelter, an emotional and physical space for her long and arduous recovery (rebuilding) from mental illness. Her descent into near-madness is described through a series of ordinary actions—walking through the woods, waking up in the emergency room, planning a vacation with her husband, performing the daily tasks of motherhood—and imbuing these events with metaphors and strange connections that illuminate her rapidly changing emotional states.

In the following description of an ordinary walk through the woods, even the sounds of the words ("moody stews", "dreamily I believe") serve to inform the reader of the borders between sane and crazy, between art and madness, between joy and mental anguish:

In these migrating woods, moods stew in me, heavy as liqueur. Under the generous awning of the evergreens, I taste the liqueur in my moody stew, hot as cinnamon or pepper flakes. I wander the woods, as wandering is what I want to do—each path is a mineshaft that might hold the darkest jewels. Dreamily, I believe these jewels are edible, like caviar. I bend, load them into the pocket of my Scout uniform, then press an acorn to my ear to hear the ocean.

The book is beautifully produced, with readable print and evocative cover art. Though a growing number of experienced authors are choosing to self-publish in order to keep creative control and royalties, Waking the Bones is certainly worthy of the benefits and prestige of a mainstream publisher, too. An outside editor could have cleaned up the memoir's one stylistic flaw, which was over-repetition of her favorite images and turns of phrase. Her surreal descriptions are so distinctive that they deserve more breathing space; as recurring catch-phrases, they lose some of their aptness to the particular situation. We hope that this prize helps Kirschner find the wider audience she deserves.

Excerpt from Waking the Bones