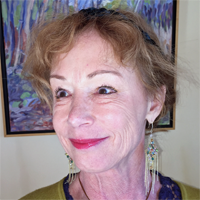 Elizabeth Kirschner recently published her memoir, Waking the Bones, with The Piscataqua Press (Portsmouth, NH). She published six previous volumes of poetry including Surrender to Light (Cherry Grove Editions, 2009) and My Life as a Doll (Autumn House Press, 2008). My Life as a Doll was nominated for the Lenore Marshall Prize, and Kirschner was named Maine's Literary Arts Fellow in 2010. She has also published over two dozen essays with Coal Hill Review and is widely published in other literary magazines in the US and internationally.

Residency stays include The MacDowell Colony, Yaddo, and Gullkistan, Iceland.

Kirschner has collaborated with many classical composers including Carson Cooman and Thomas Oboe Lee, resulting in various CDs. She set her own poetry to Robert Schumann's love song cycle, retitled it The Dichterliebe in Four Seasons. She lives in a cottage named Sea Cabin on the water in Kittery Point, Maine, with her old dog, Larka. Learn more on Facebook.