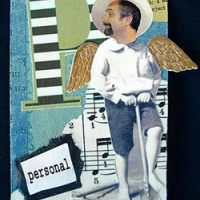 Andrew Periale is a puppeteer, playwright, poet and polyglot. He is the current poet laureate of Rochester, NH, as well as the longtime founding editor of Puppetry International magazine. With his wife, Bonnie, he founded the Emmy-nominated Perry Alley Theatre, which has toured all over the country and in Europe. He was awarded an UNIMA Citation for excellence in the art of puppetry for his solo show Chinese Take-Out Theatre, in which the audience orders off a Chinese menu, and sketches have been created based on food names from actual menus ("Wanton Soup"—very spicy!). He sometimes performs as his cowboy alter-ego, Woody-Boy Johnson, and has produced a CD of his original and twisted songs (Woody-Boy Johnson: 3 Easy Chords and a Hard One).