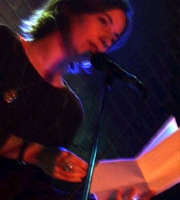 Andy Young is an artist/teacher in the creative writing department at NOCCA/Riverfront in New Orleans, Louisiana. Her most recent chapbook, All Fires the Fire, was published this year in a limited, hand-made edition by Faulkner House Books (orders: call 504-524-2940 or email Faulkhouse@aol.com), and her chapbook, mine, was recently reprinted by Lavender Ink. Winner of the Faulkner Society's Marble Faun Award, Pushcart Prize nominee and a Louisiana Division of the Arts Fellow, she was a guest of the US Consulate in Monterrey, Mexico, in the summer of 2003 where she read and performed her work. Her poems have recently appeared in Dublin's The Stinging Fly and in the anthology Another South: Experimental Writing in the South. Originally from West Virginia, her words have been translated into Spanish, Catalan and Arabic and featured in electronic music, jewelry designs, and dance and theatre productions. Read Ms. Young's poetry on the following pages:
http://www.lavenderink.org/andyyoung.htm
http://www.corpse.org/archives/issue_9/poesy/young.htm
http://www.corpse.org/archives/issue_4/burning_bush/young.htm

Winning Entry: Getting the news in Arabic, To think of Madrid, March 11