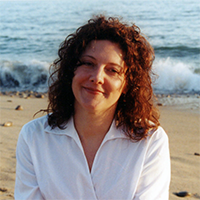 Anne Delana Reeves is a writer, photographer, and educator. About her work she says, "How memory binds itself with place, landscape, and history, making us who we are, provides the catalyst for many of my poems. For me, this idea corresponds to William Faulkner's directive for writers to explore 'old universal truths…the human heart in conflict with itself.' If we fail, our 'griefs grieve on no universal bones, leaving no scars.' And I like the scars."

Anne is currently completing a collection of poems titled Women's Voices From Other Rooms. She lives in an old house overlooking Tennessee's Duck River with her dog Fergus, who chases the occasional snake out of the kitchen.