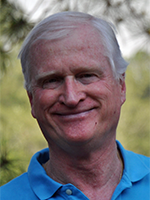 Arthur Powers is a past judge of the Tom Howard/John H. Reid Fiction & Essay Contest. Mr. Powers went to Brazil in 1969 as a Peace Corps Volunteer and has lived most of his adult life there. From 1985 to 1992, he and his wife served with the Franciscans in the eastern Amazon, organizing subsistence farmers in an area of violent land conflicts. They subsequently directed relief and development projects in the drought-ridden Brazilian Northeast. Currently they live in North Carolina.

Mr. Powers is the author of A Hero for the People (Press 53, 2013)—a collection of short stories set in Brazil—and The Book of Jotham (Tuscany Press), which won the 2012 Tuscany Press Novella Award. He has received a Fellowship in Fiction from the Massachusetts Artists Foundation, three annual awards for short fiction from the Catholic Press Association, the 2014 Catholic Arts & Literature Award for adult fiction, and second prize in the 2008 Tom Howard/John H. Reid Short Story Contest for "The Bridge". He is the contemporary editor emeritus of CatholicFiction.net, judge of the 2015 Dappled Things JF Powers Short Story Contest, and serves on the board of The Raleigh Review.