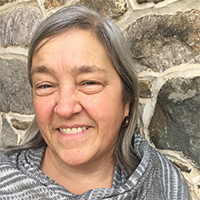 Athena Kildegaard lives and teaches in Morris, Minnesota, in prairie pothole country. Her sixth book of poems, Prairie Midden, has just appeared from Tinderbox Editions. She is the co-editor, with Margaret Hasse, of the anthology Rocked by the Waters: Poems of Motherhood, which won the Midwest Book Award for best anthology. Kildegaard has been nominated for a Pushcart Prize several times and has received grants from the Minnesota State Arts Board. Her poems have been set to music by numerous composers, and the cantata "To Know the Path", for which she wrote the libretto, premiered in February this year. Her poems have appeared in Conduit, december, Ecotone, RHINO, Beloit Poetry Journal, Poetry Northwest, North American Review, and elsewhere.

Winning Entry: Room in the Bag of Stars