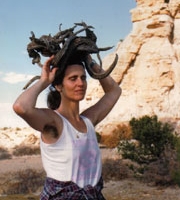 Beth Ferris is a poet and film writer-producer with an MFA in Poetry from Warren Wilson College, North Carolina. She has taught "Poetry as a Healing Art" for eleven years to people suffering from traumatic illness and chronic pain with Living Art and Healing™ and is a co-founder of the nonprofit organization. Her work has appeared as award-winning poems in the Nimrod Awards Eleven, Iowa Woman Awards, and The Sow’s Ear Poetry Review Awards Issue, and received an Honorable Mention in the 2003 Winning Writers War Poetry Contest. Her poems have been anthologized in The Best of Northern Lights and published in The Festive Table, 1995. She was co-producer and writer of the feature film "Heartland" and was awarded the Neil Simon American Playhouse Award for the Heartland script in 1984, and the St. Christopher Medal, as well as inclusion in the Cowboy Hall of Fame. She was involved in writing and co-producing documentary films including "Next Year Country"; "Contrary Warriors", a story of the Crow tribe and its struggles to save land and culture; and "Hearts and Hands", a social history of the 19th century as seen through the medium of quilt making.

Winning Entry: Republic of Glass, Endless Knot, By the River