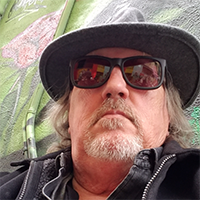 Byron Spooner is the author of Rounding Up a Bison: Stories (Andover Street Archives Press, 2021). He retired as the Literary Director of the Friends of the San Francisco Public Library after 21 years. There, in addition to selling $1.5 million in used books annually to benefit the library, he produced literary events including a highly-successful weekly poetry series featuring a diverse array of California poets, with co-producer San Francisco Poet Laureate Emeritus Jack Hirschman; three San Francisco International Poetry Festivals; and Latinx and Vietnamese poetry festivals. He founded and edited The Readers Review, the Friends' literary blog, where he wrote about books, music, film and bookselling. His writing has been published widely on a variety of platforms and won Honorable Mention in the 2021 Dillydoun International Fiction Prize competition for his story "The Acrobat Rides the Horse in Sequins". He was invited to the Napa Valley Writers Conference in 2017. He served on the San Francisco Poet Laureate Nominating Committee and the One City, One Book Selection Committee of the SFPL and on the Boards of Litquake, California Public Library Advocates, and the Advisory Board of the Beat Museum. He is also an adventurer, a naturalist, and a partner in Andover Street Archives, brokering literary and cultural archives to university libraries. From 1982 to 1996 he owned and operated Books Revisited, an award-winning outlaw bookstore in San Rafael, California. Back in the seventies he was a founder, editor, and writer of The Paper Tiger, the underground newspaper of the New Jersey Student Union. He lives with his wife, writer Judith Ayn Bernhard, in San Francisco.