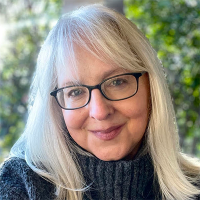 C. Vargas McPherson is an essayist, poet, and memoirist. As an author, she is interested in the intersection between truth and historical record, where efforts to derive personal meaning from life are as valued and pertinent as those crystalline facts that serve as starting points.

A graduate from the University of Texas at Austin, she holds degrees in Philosophy and English Literature and earned a graduate degree in Philosophy of Existential Faith from the University of Houston. She has studied at the C.G. Jung Institutes in Küsnacht, Switzerland; London, UK; and Boston, Massachusetts. Her work has appeared in Literary Mama, Bloom, The Mighty, Medium, and other online publications. C. Vargas McPherson now lives in Portland, Oregon, with her family and a cat named Simon.