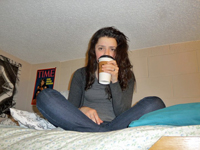 Catherine has no credentials. She also thinks that in order to become a poet she must don all black, pick up smoking, and leer down suspiciously at strangers on the street through the window shades of her dimly lit apartment, the fridge of which contains nothing but film, wine and a half-eaten piece of cake, while music plays in the background that is equal parts angsty and sophisticated. Apparently she thinks that to become a poet, she must become stereotypically French. Let's all hope this never happens. When she is not pondering about how to become a poet, Catherine dabbles in the nonsensical and is a great appreciator, nay, connoisseur of the ever dreaded "awkward situation".

Winning Entry: The Loyalty of the Sock Questioned