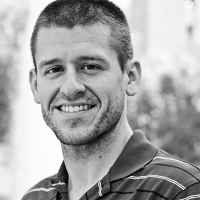 I did my undergrad at the University of Central Florida where I worked as an editor at the Florida Review. In spring 2014, I graduated from Iowa State University's Masters of Fine Arts Program in Creative Writing and Environment Program where I served as managing editor of Flyway: Journal of Writing and Environment. While going to school and editing, I've always been involved in some sort of physical activity. In Florida, it was running and biking. (In high school it was skateboarding!) Out here in Iowa, it was playing basketball.

I came to writing as a reader. The Hobbit was the first novel that I took to reading on my own back in fourth grade. Since then, I've always enjoyed books about journeys, struggle, and adventure. To readers who love running adventures I would recommend both Born to Run by Christopher McDougall and What I Talk About When I Talk About Running by Haruki Murakami.

"The Gift of Nothing" has been quite a gift of something: I submitted it as my writing sample for my application to Iowa State. It was the toughest thing I had written. Both Benjamin Percy and Steve Pett selected me for the program because of my essay. I can't thank them enough for giving me the chance to continue my adventures in writing.

"The Gift of Nothing" has had a long journey of publication: on Stymie: journal of sports and literature (fall/winter 2011), cited as "notable" in Best American Sports Writing 2012, re-published in Sports Literate's "body and mind" themed issue (fall/winter 2013), and now on Winning Writers.

Currently, I live with my wife Lauren Zastrow in Ames. We're figuring out our next adventure. I'm still writing and reading, but not running so much anymore.

My writing has also been anthologized in Best Food Writing 2013 and published in Edible Iowa River Valley, Gastronomica, Graze, Make, and Sliceas, well as on FOUND, the Huffington Post, Matador, Nerve, and the Rumpus, among many other magazines. Read more at www.chriswiewiora.com.

Winning Entry: The Gift of Nothing