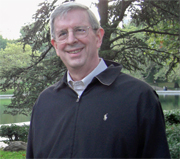 A graduate of Harvard Law School, Fred McGavran defends psychiatric malpractice claims and represents veterans in claims against the Veterans Administration as counsel for Frost Brown Todd LLC in Cincinnati, Ohio. The Ohio Arts Council awarded him a $10,000 Individual Achievement Award in 2009 for a story that the Harvard Review will publish. Black Lawrence Press is publishing The Butterfly Collector, a collection of his short stories, this fall.

McGavran won the 2007 Writer's Digest Short Story Contest in the horror category, the 2004 Tom Howard/John H. Reid Short Story Contest, the 2003 Raymond Carver Award from Humboldt State University, and has placed in a number of other literary and screenwriting contests. His stories have appeared in Pearl Magazine, Rosebud, Gray's Sporting Journal, Dreams & Visions, Storyglossia, Short Story International, and other literary magazines and e-zines.