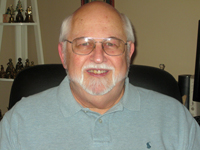 Harry E. Gilleland, Jr. is a 64-year-old southerner. Born and raised in Macon, Georgia, he earned a B.S. (1966) and a M.S. (1968) in Microbiology from the University of Georgia in Athens. Following three years of service in the U.S. Army as a captain, including a tour of duty in Vietnam, he returned to earn a Ph.D. in Microbiology from UGA in 1973. He then headed north to complete a two-year postdoctoral fellowship at the University of Western Ontario in London, Canada. In July of 1975 he joined the faculty of the Department of Microbiology and Immunology at Louisiana State University Health Sciences Center in Shreveport, Louisiana. After twenty-nine years of teaching microbiology to medical and graduate students and performing vaccine research, Harry retired in July of 2004. Today Harry lives in Shreveport with his wonderful wife Linda and their Corgi, Rusty. Harry enjoys being able to engage in his passion for writing full-time.

Harry Gilleland's poetry has been included in four multi-author print anthologies of poems and short stories, in several poetry e-zines, and on numerous Internet poetry forums, in addition to his own three published collections. His poetry is readily accessible to all readers, including those who do not regularly read poetry. His storoems (story-poems) and poems address a variety of topics, from everyday life events, observations of Nature, tales of fantasy, expressions of love, and more. Harry views the world with a poet's eye.