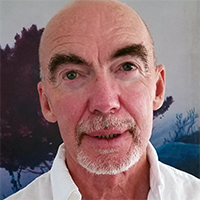 I never wanted to be an astronaut. I did want to be a major-league catcher, a composer, a ship's captain, a famous preacher, the tallest, handsomest guy in school. I have been none of those.  I have been a small-animal whisperer, a dad, a teacher, an editor of academic and scientific writing, a trail runner, both a spreader of consternation and a peacemaker. I began scrawny, dreamy, timid, and easily confused. Except for the last of those, I am older now and less of each. In youth, I was sure that whatever my father wanted me to do probably was right in the world's eyes and profoundly wrong for me. We were both right—and wrong. Still, he had some insight into who I was, including the assurance that I would fight whatever was probably good for me. So, it was despite, hardly because of, my natural inclinations that I graduated from college and graduate school, and perhaps from spite since my father told others that I would never do either. He proved that one can be a motivational speaker without being inspirational.

Thereafter, I rose to the occasion of reaping the rewards of my stubbornness: teaching, tutoring, and then editing and writing. I stumbled headlong into an ideal job for a single dad as an editor and writer of scientific publications in the national laboratory system. I was blessed with interesting subject matter—environmental issues and health, in the days when government cared about those—and with collegial staff and clients. The discipline of deadlines and daily learning assignments transformed an impressionistic writer to one dedicated to creation. It worked well for twenty years, until I was ready to return to some form of noncompliance.

I retired to live among poor, colorful people in a shanty-oasis, square in the midst of the most bourgeois part of Portland, Oregon. There, I wrote short stories (five collections based on themes in Buddhist philosophy), ran trails, learned horticulture, and lived out another stretch of my dharma. Among the projects of that time was a play, Lay of the Land, that grew out of my experience growing up in southern Minnesota. Now and then on a Sunday afternoon, my family would drive to the nearest town of note, Mankato, and eat lunch in a park near the river. One day, I noticed a granite monument with a plaque that drily noted that on December 26, 1862, at that site, 38 Sioux Indians were hung by order of President Lincoln. In my mind, the plaque added that it was the largest mass execution in U.S. history. I asked my parents about it. They knew there had been an Indian war there but knew nothing else.

I had always felt something, I thought, something unsettled and unsettling in the earth around me—the corn fields, the lakes, the tiny prairie swatches overlooked and unplowed at the fields' edges. I had always felt at home and alien there. The feelings wanted to be explored but had to wait. When I finally could turn back to the story and my old instincts, I found that there had been a renaissance of interest in that event and its narrative setting, now with viewpoints that included the Dakota peoples who suffered before and after. The park with the plaque is now called Reconciliation Park. As I read the new materials, I observed that what was old is new: the fear of the other, the unresolved and unreconciled claims about whose land and whose home, the durable curse of colonialism and racial privilege, the raging confidence of prejudice. It's all here, everywhere, now. It is the burden of the historian and the youth. Histories touch the present by extension, I thought, so I turned to poetry to show both that past and this moment: to the music and language suitable for such an operatic tale of hope and despair and to movement and stylized theater, where one mask is exchanged for another, that time for this.

Winning Entry: Lay of the Land

Deadline Dec 15: The 3rd Annual Story Foundation Prize; submit unpublished short stories of up to 10,000 words each to win $1,500 and publication; fee: $25 per entry | storymagazine.org/news/the-3rd-a… via @StoryLitMag HT @newpages pic.twitter.com/peVBHgV4wV