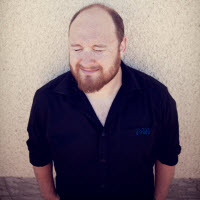 Jason Lee Norman was born and raised in the Edmonton area. With a degree in English from the University of Alberta and a Masters in Creative Writing from the University of Manchester, he returned to Edmonton in 2009 to make his fortune. He is the author of two short story collections: Americas and Beautiful Girls & Famous Men, and is the co-founder of the @yegwords (Words with Friends) creative writing collective, which holds regular events in Edmonton throughout the year, including the very popular Word Crawl.

In 2013 he introduced Edmonton to 40 Below: Edmonton’s Winter Anthology, 70 pieces of poetry, fiction, and nonfiction all about or inspired by winter in Edmonton. 40 Below was published by Jason's small publishing concern Wufniks Press.

In the past few years Jason has nominated himself for dozens of awards but has won very few. He hopes to one day finish his novel so that it may receive a scathing review in the National Post. Thus completing the circle of life.

When Jason isn't writing sublime, inventive prose he can usually be seen shouting at a television set at one of his beloved sports teams or watching the Food Network.