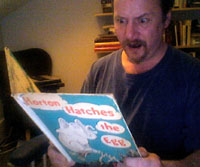 Jim has been kept from his writing urge by a career in the music business until now. "A career," his father always told him, "is a job that's gone on for far too long." He was raised in Amherst, Mass., got a BA in English from the University of Massachusetts, managed WMUA for a few years, DJ'd at WRSI, and took a promotion job at upstart indy label Rykodisc in Boston in 1988. He moved to Los Angeles in 1992 where he spent 8 years at Rhino Records in the same capacity. He was a DJ on KCRW, took some writing classes at UCLA, dated a C-list movie star, and was shot in the face in a random drive-by. He appeared on a game show and won lots of particle board furniture. He programmed audio channels for Air Force 1 & 2. He left Los Angeles in 2003 and returned to Western Massachusetts where he'd grown up. He continues to grow up. Currently, he's the print/poster buyer at Faces in Northampton. He founded Drive By Poets, a public poetry postering project. He's saving up his allowance to start the MFA Writing program at UMass.