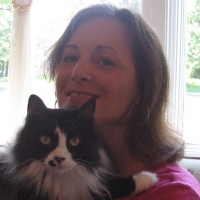 My poetry has appeared or is forthcoming in The Comstock Review, The MacGuffin, Karamu, White Pelican Review, Third Wednesday, California Quarterly, Artword Quarterly, Artisan: A Journal of Craft, The Awakenings Review, Arts Alive! Literary Review, Blood and Thunder, Poetry Cram, Voices on the Wind, Jewish Women's Literary Annual, and Julien's Journal, and the anthologies Shadow and Light: A Literary Anthology on Memory (Monadnock Writers' Group, 2011), Feast of Fools: Poems, Stories, and Essays on Sacred Fools and Tricksters (Sacred Fools Press, 2011), and Child of my Child: Poems and Stories for Grandparents (Gelles-Cole Literary Enterprises, 2010). I have also won several awards, including First Place in the Sinipee Writers' Annual Poetry Contest.

I live in a suburb of Chicago with my husband, Alan, and our two cats, Honey Pie and Bobbie Socks. I am a freelance writer and editor. Currently, I am writing a book for a clock museum on the history of American clocks.