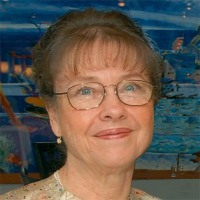 Lois Elaine Heckman was born and raised in Los Angeles, where she received a degree in Italian from UCLA. A charming Italian man beguiled her quite a long time ago, and she has ever since made her home with him in Milan, Italy. They have two wonderful children and three beautiful granddaughters. Lois was a volunteer nurse and first aid instructor for the Italian Red Cross for many years. Now she spends much of her time attempting to write meaningful poetry.

She has had works published in Tilt-a-Whirl, Lighten Up Online, Boston Literary Magazine, Prole, YJHM, Persimmon Tree, New Verse News, and Sonnet Scroll, among others. She won the 2010 New England Shakespeare Festival Rubber Ducky Sonnet Contest, and has received recognition in various other international contests, including the Poetry on the Lake competition (2012 and 2013), the 2013 Cannon Poets "Sonnet or Not" competition, and the 2014 Hungry Hill Poets Meet Politics competition. Her chapbook, Out of Nowhere, was published by White Violet Press in 2013.