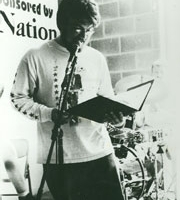 Nicholas Moore is festering in poverty in Bloomington, Indiana, as a security guard at a refrigerator factory (seriously). His phone was recently turned off.

His first love is comedy. You can enjoy his comedic writings at Size Matters and more Size Matters.

He has three poems published in Fine Wine Mortar as a result of his always charming, if sometimes intoxicated presence in the bustling Bloomington-Indiana poetry scene (which is more bustling than you might imagine).

His poems are against the war, and so is he.

Someday he will be a millionaire funnyman.

Winning Entry: How to Write a Poem