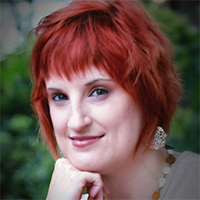 Nicole Evelina is a historical fiction, romantic comedy, and nonfiction author whose four novels have won more than 20 awards, including two Book of the Year designations. Her most recent release and first nonfiction book, The Once and Future Queen, examines popular works of Arthurian fiction by more than 20 authors over the last 1,000 years to show how the character of Guinevere changes to reflect attitudes toward women. She's currently working on Mistress of Legend (2018), the final novel in her Guinevere's Tale historical fantasy trilogy and researching two future nonfiction books.

Nicole's writing has appeared in The Huffington Post, The Philadelphia Inquirer, The Independent Journal, Curve Magazine, and numerous historical publications. She is one of only six authors who completed a week-long writing intensive taught by #1 New York Times bestselling author Deborah Harkness. As an armchair historian, Nicole researches her books extensively, consulting with biographers, historical societies, and traveling to locations when possible. For example, she traveled to England twice to research the Guinevere's Tale trilogy, where she consulted with internationally acclaimed author and historian Geoffrey Ashe, as well as Arthurian/Glastonbury expert Jaime George, the man who helped Marion Zimmer Bradley research The Mists of Avalon.

English instructors, parents: Does the prospect of writing an essay leave your kids paralyzed? Here's how to break the assignment down into smaller steps and make it doable: theatlantic.com/education/arch… via @TheAtlantic #WriteTips pic.twitter.com/Ux7P35CdIb