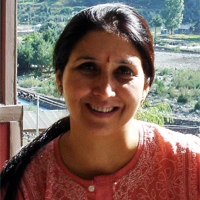 Nirupama Kotru is presently posted as Director (Films) in the Ministry of Information & Broadcasting, Government of India. She is an officer of the Indian Revenue Service (Income Tax) of the 1992 batch. She did her schooling from Delhi Public School, Mathura Road, New Delhi. She completed her graduation in Economics (Honours) from St. Stephen's College, Delhi University, and post graduation in Politics and International Relations from Jawaharlal Nehru University, Delhi. She has been on deputation to Central Government since 2009 in Ministry of Corporate Affairs, where she was responsible for all matters pertaining to conceptualization, design and implementation of various e-governance initiatives of the Corporate Affairs Ministry including MCA21 (electronic registry of all company data), Limited Liability Partnership, Official Liquidators' offices etc. She has also helped in setting up the Indian Institute of Corporate Affairs at Manesar, Gurgaon. Currently she looks after the administration of 8 media units of the Ministry of Information & Broadcasting in the field of films, including the National Film Development Corporation (NFDC).

She says of the inspiration for "A Mother's Musings": "I am a bureaucrat; a working woman and a mother of two young children. I have often experienced that while motherhood is extremely rewarding, it is also extremely challenging and far more complicated than any job in the world. Growing children throw new challenges at you all the time, and no training can equip you for facing these challenges. Above all, a working woman can never really 'have it all'. She must be prepared to give up on something precious if she has to really succeed at work."

Her interests are writing, singing, fitness, reading and cinema. She can be reached at: nkotru@yahoo.co.in