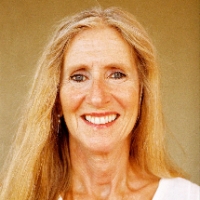 Pamela Uschuk is the author of five books of poems: the award-winning Finding Peaches in the Desert, One-Legged Dancer, Scattered Risks, Without the Comfort of Stars: New and Selected Poems (New Delhi & London: Sampark Press, 2007), and her latest, Crazy Love (Wings Press, 2010), winner of a 2010 American Book Award. She is also the author of several chapbooks of poems, including Pam Uschuk's Greatest Hits (Pudding House Press, 2009). In 2011, Wings Press will release her new collection of poems, Wild in the Plaza of Memory.

Translated into a dozen languages, her work has appeared in over three hundred journals and anthologies worldwide, including Poetry, Parnassus Review, Agni Review, and Ploughshares. Pamela Uschuk is Associate Professor of Creative Writing at Fort Lewis College, where she also directs the Southwest Writers Institute. Editor-In-Chief of the literary magazine Cutthroat, A Journal of the Arts, Uschuk lives in Bayfield, Colorado. She was the John C. Hodges Visiting Poet at University of Tennessee, Knoxville during spring semester 2011.