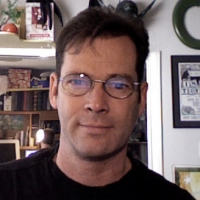 Paul Manchester, though not a terribly industrious housekeeper, has not yet been able to create sentient life in his shower...but he has not given up. Paul is an illustrator, wordsmith, and graphic artist based in Los Angeles. He has just released his first book of whimsical verse, Pursuits of Whimsey. You can find out more about Paul at wilwhimsey.com.

Deadline Tonight! For The Love Of The Craft: A Short Fiction Contest From HBO & The Root; no fee; pick an important time in Black American history and weave a tale of the monsters that litter that time to win $5,000, publication, and mentorship | gomedia.submittable.com/submit/172713/… pic.twitter.com/Rg01waQ9yu