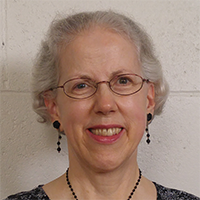 Penny-Anne Beaudoin earned a Master's Degree in Pastoral Ministry in 1997 and has published articles pertaining to religion and spirituality in several Canadian and American journals. She was nominated for the Canadian Church Press Award in 2000. Her fiction has been published in Lorraine and James, Writers On Line, Ascent Aspirations, Flash Me, FreeFall Magazine, The Rose & Thorn, Skive Magazine, The Canadian Writers' Journal, and flashquake. She was nominated for the Pushcart Prize in 2005. Her poetry has appeared in The Windsor Review, On Spec Magazine, Quantum Muse, Room of One's Own, Les Bonnes Fees, Membra Disjecta, Offside, and Doorways Magazine. She was nominated for the Rhysling Award for the year's best speculative poetry in 2009. Both her short stories and poems have won or placed in a variety of competitions.

holy cards: dead women talking (Black Moss Press), a collection of first-person poems about women saints, is her first book publication. She has submitted her second poetry manuscript to a publisher and is trying to remain calm and detached as she waits for the verdict. Penny-Anne lives in southwestern Ontario, Canada, with her husband Tony and various figments of her imagination. She sings, has been known to preach on occasion, blogs about writing and life, and tries not to think about the unfinished novel languishing in her desk drawer.