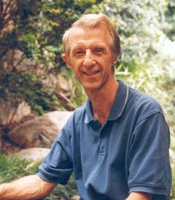 Peter Taylor was born in England and quickly introduced to the wonderful world of gardens, where he spent many happy hours eating dirt and wriggly things. Soon he graduated to playing with dirt and every living thing he could find, making up stories and living in his own imaginary world.

Later, he trained as an ecologist and teacher, emigrated to Australia in 1982, and now lives in Brisbane.

Peter left his teaching post in 1987 to write The Australian Manual of Calligraphy for Allen and Unwin and A Manual of Calligraphy for Unwin Hyman/Harper Collins. At the same time he started his own book-arts business, Peter Taylor's Calligraphics, specializing in calligraphy, illumination and artist's book construction, and in teaching the skills involved. One of his handmade and calligraphed books was presented to Her Majesty the Queen of England as part of her gift from World Expo '88.

When making up stories for his children, when they were young, Peter realized that in all jobs, he has always loved writing—so in 1999 he studied for a Diploma in Professional Children's Writing. After further developing his craft under the mentorship of Marg McAlister, he now spends most of his working life writing—but escapes whenever he can to garden, photograph wriggly things and enjoy the great outdoors, visit schools, do public speaking engagements and teach workshops.

Peter's passion is to share his love of words and books, and encourage others to write and create for pleasure and personal satisfaction as well as for publication. His article on "Writing for Boys (and others)" gives more explanation.

His latest picture-storybook for children is titled Kangaroo's Visitor gets a Surprise—details of which can also be found on his website. Though Peter believes some of his ideas are too whimsical, and his mid-grade novel too "politically incorrect" to ever appear in print, he has a selection of other stories and verse ready to send to publishers. He thinks he needs a literary agent!